Back in 2010, the Northwest Territories Power Corporation (NTPC) was caught between a rock and a hard place as the saying goes. The rock fill dam at its Bluefish Hydro Facility, located 39 km north of Yellowknife on the Yellowknife River system, was leaking. Although a stopgap repair had been performed as recently as 2007 the dam was quickly reaching the end of its service life and no one knew how much longer it could hold out - maybe another five years or as little as one. Should it fail before it could be replaced the cost to the Northwest Territories could be much more than the loss of tens of millions of kilowatt hours in renewable energy the dam generated every year (which would then have to be generated with diesel); it could also mean a costly clean-up for the unintended environmental effects that would likely result. Clearly the dam needed to be replaced, and quickly.

“The work was being done under an emergency scenario,” recalls Dan Roberts, Director of Asset Management and Engineering for the NTPC. “We had to get the dam built as quickly as we could, which then presented the challenge of finding a contractor who could build it in two seasons.”

The challenge only increased when it was discovered that the initial project estimate of $18.5 million – which had been based on a generic dam design and didn’t take into account a number of site-specific requirements – was too low by a significant margin. Bids were coming in at least twice that amount and there was no guarantee that the final price would stop there. As such, concern was growing that the dam might not be affordable. Worse, the 60-day acceptance window was rapidly closing, so with only two weeks left to decide to accept or reject the bids NTPC reached out to InterGroup Consultants for some objective advice. At the time InterGroup was already engaged by NTPC to assist it with its rate proposals (a role it had performed since before 2000) and brought with it not only an excellent working knowledge of NTPC’s operations but also an understanding of the Bluefish Dam itself as it had assisted with the purchase of the dam back in 2003.

“When we got the call the big issue was that costs were spiraling out of control,” recalls Patrick Bowman, Principal and Consultant at InterGroup Consultants. “This was the biggest capital project NTPC had ever done and they weren’t confident in either the design they had in front of them, or the projected costs coming back. They had to decide quickly whether or not they were going to award these bids – even though they were way too high – or cancel their tender and do something different.” 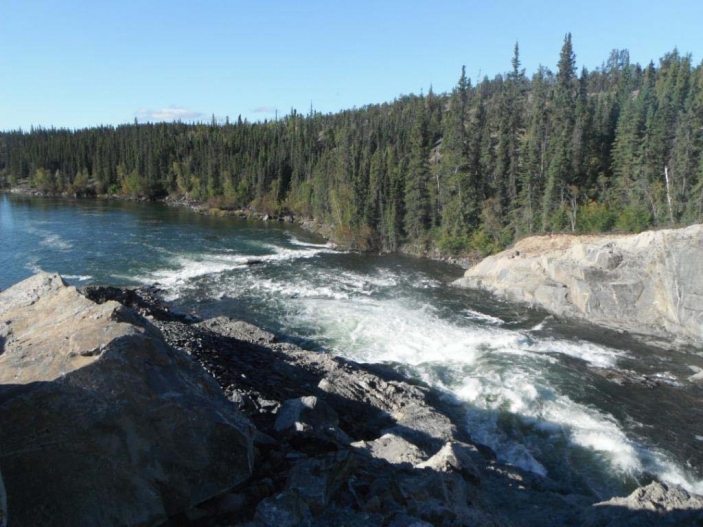 Bowman says that one of the first things InterGroup noticed after being called in was that the opportunity to build a winter road and start construction in the summer of 2010 had already passed. That might buy NTPC some time and open the door to some out-of-the-box thinking.

“It was clear that we now had a window in which we could take a pause and explore some different options,” said Bowman. “After reviewing what was in front of them we recommended that NTPC cancel its original tender and pursue a more collaborative design and build process based on the alliance model.”

The alliance model, which InterGroup already had experience with through a project in the Yukon, selects a contracting firm early in the process to assist in the design of the project (or in this case, re-design). The firm is paid a fee for its service and is the presumed contractor for the build, but is not guaranteed the work. The model’s benefit is that the contractor is now involved in the project’s design from the outset, allowing it to provide the client with input that can improve the design and help control costs. This collaboration continues through the build process, with client and contractor working together to determine solutions and pricing. This helps alleviate any unforeseen issues as they arise (and they always do). Another advantage to the model is that there is no bid amount to work to, so there is no need for the contractor to beef up their bid price to account for contingencies they have to carry, which can sometimes be a black hole for costs on larger projects. Rather, the contractor and client agree to share risks in a transparent way, negotiate a projected cost based on the design they have developed together, and the contractor is then rewarded if the project comes in under that amount, or penalized if it comes in over.

“You’re getting contractor input all the way along,” confirms Bowman. “You’re benefiting from the contractor’s experience and ideas, and you are negotiating a price with them. If you don’t like the price at the end of the design phase you can walk away.”

Of course the downside of the alliance model is that client never receives a fixed cost up front to which it can hold the contractor. But if you are racing against the clock like NTPC was, then an alliance approach was probably the best road to take.

“With or without the alliance approach the dam would have been built,” said NTPC’s Roberts. “The biggest plus from the alliance model was that it eliminated what I am almost sure would have been a big legal fight in the end. If the contractor had been engaged under the original fixed price they would have been coming back to us with extras for this, claims for that. We would probably have had to say no to a lot of it and likely ended up in court together. The alliance process saved us from that.” 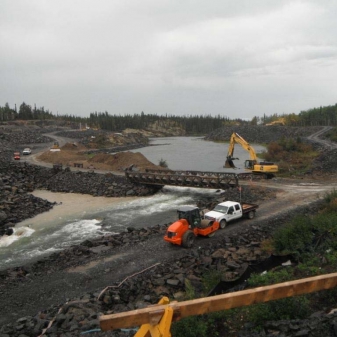 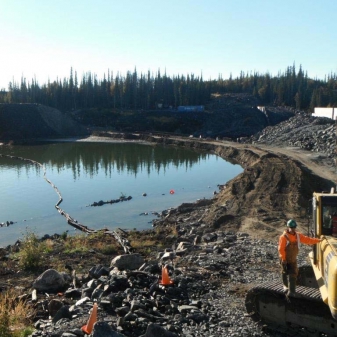 While InterGroup was originally brought into Bluefish to help with the contract, that role quickly expanded to include assistance with both general project management as well as the securing of the proper environmental licences the dam would require. In the case of the latter, Bowman says that early on in the consultation process InterGroup discovered that there was some confusion over which environmental approvals would be required. Some believed that because the new dam was an emergency project, therefore it didn’t require an environmental assessment, that normal licensing procedures could be bypassed.

So InterGroup was asked to lead and coordinate the environmental approvals process to make sure that all of the necessary work was done in time. According to Bowman, the biggest challenge was to get everyone – the licensing boards, the consulting engineers and scientists and even the client itself – working together to the same objectives and timeline.

He says that the challenge on projects like this is that people often get focused on their small piece of the puzzle, with no one helping to coordinate all of the work into one cohesive presentation.

“Sometimes people working on large projects don’t realize how many moving parts need to come together to make a project work. It’s common for some of those moving parts to think that they are all that matters and they lose sight of the big picture.”

It is here that InterGroup’s previous involvement with the Bluefish Dam, as well as its understanding of NTPC’s overall operations through its rate work, started to pay dividends. Not only was InterGroup able to draw on its own records, it could also draw on the memories and experience of staff who had worked with NTPC for more than a decade.

“When you are going through these regulatory processes there is a lot of history involved and often times with some of these clients we find that we have a better institutional memory for them than their own staff because we’ve been around longer; we don’t have the same turnover of staff.”

“In the case of Bluefish we knew the history of the dam, the business case for making the purchase and the environmental work that was done in support of that decision. A lot of times the easiest way to get yourself tripped up in some of these regulatory proceedings is to present information not consistent with what you previously said.”

Dan Roberts agrees that InterGroup’s greatest contribution to NTPC on Bluefish was in project management and the environmental side.

“The more important role that InterGroup played, I found, was helping to drive the environmental approvals process. They had mapped out all of the key parts, what was needed to be done and who needed to be contacted. And they didn’t just make a schedule for us to follow, they stayed on top of us and provided support to help us get the approvals. They even assisted at the water hearing where their prior knowledge of Bluefish and experience with the process was very helpful. I would say that without them Bluefish would not have been built on time, because we wouldn’t have gotten the approvals done.”

According to Bowman the level of management assistance that InterGroup was able to provide on Bluefish is typical of the added value it can provide its clients, especially in times of crisis or on particularly challenging projects where regulatory approvals are required.

“With a lot of consultants who would work on a project like Bluefish, their job would be done as soon as the project was commissioned. But because our primary role with NTPC is to provide consultation on their rates, we could provide a bridge between the capital construction phase of the project and long term operating support for the facility, especially in terms of its impact on ratepayers throughout the territory.”

And for those ratepayers the math of Bluefish has been positive. Even though the final price came in at $37.4 million, more than double the original estimate, this price was almost $10 million below the worst case scenarios that were being discussed at the time InterGroup was brought on. For this price, the people of the Northwest Territories have received a dam that is projected to last them for the next century. More important, the 40 million kilowatt-hours that the dam produces displaces energy produced by approximately 10 million liters per year of less environmentally friendly diesel fuel. At today’s fuel prices the dam pays for itself in about five years, and will keep giving back to the people of the Northwest Territories for another 95; all-in-all not a bad outcome for a rushed project that was developed under the gun. 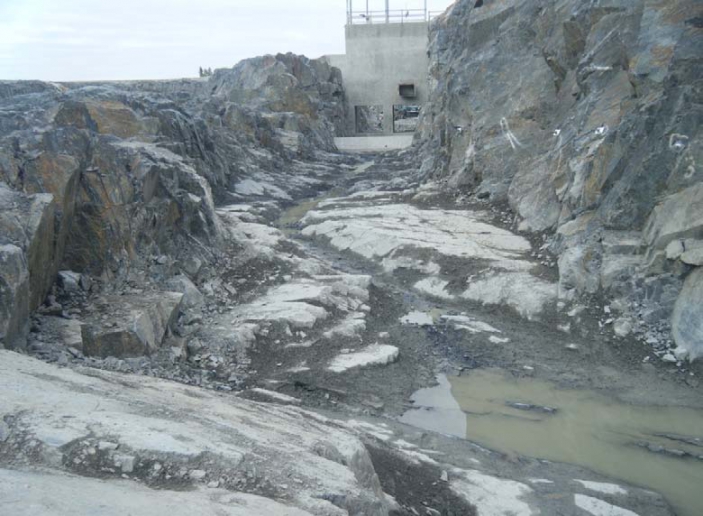