Out-of-the-box thinking leads Yukon Energy through a series of firsts.

“How about there, is that spot better?”

It’s the summer of 2006 and InterGroup’s John Osler is walking the dense boreal forest of central Yukon with a First Nation’s elder trying to determine the best place for a transmission tower, one that won’t spoil his view from a vantage point that is special to him. Eventually they settle on a location behind a hill that would keep the transmission lines completely out of sight. It is a level of individual negotiation that would be repeated many times by InterGroup as part of the consultancy's work on the Yukon Energy Corporation’s (Yukon Energy) Carmacks-Stewart Transmission Project (CSTP). This 172 kilometre transmission line between the communities of Carmacks and Stewart would connect the Minto mine and Pelly Crossing to the southern Yukon hydro grid in 2008, and finally unify Yukon Energy’s northern and southern energy grids into an integrated transmission system in June of 2011.

“Such personal negotiations and creative solutions are common to the site selection and environmental assessment process for any major infrastructure project,” says Osler. “Ideally, the process should allow anyone who thinks they might have an interest in the project, the land or the way the land is being looked after to have their say in the matter. At the end of the day our objective is to have a final project that best reflects all of the opportunities, constraints and requirements for safety identified from those different points of view.” 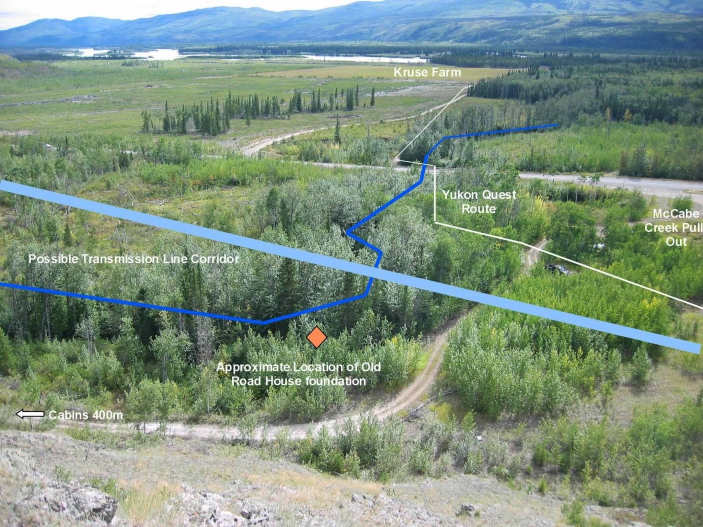 Measuring 172 kilometres in length, the Carmacks-Stewart Transmission project (including a 27 kilometre spur line from Minto Landing to the Minto Mine completed in 2008) successfully connected Yukon Energy’s northern and southern grids in June, 2012. In the process, the line has allowed both Minto Mine and the community of Pelly Crossing to switch from diesel to electric power, reducing greenhouse gas emissions by between 25,000 to 30,000 tonnes per year.

As major infrastructure projects go, Osler says that the CSTP was a bit more challenging than most due to the many “firsts” it would involve and the narrow timeframe in which it had to be completed. It was the first assessment filed with the newly formed Yukon Environmental and Socio- economic Assessment Board (YESAB), and both Yukon Energy and YESAB would be going through their own learning processes with the project. It was the first time a Yukon Energy project would require separate applications under Part 3 of the Public Utilities Act with a public hearing review by the Yukon Utilities Board, adding an extra level of complexity to the matter. It was also the first time Yukon First Nations would be both consulted and engaged as independent economic partners on a major infrastructure project in territory requiring permits on First Nation Settlement Lands. Finally, Capstone Mining Corporation would be asked to contribute towards a portion of the capital cost in building a Yukon Energy project through a power purchase agreement, also a first for Yukon Energy.

Adding to the project’s difficulty was its extremely tight time window. Basically, all of the studies, consultations, agreements, applications and approvals had to be completed within about a year and a half if the project was to make economic sense for Capstone’s Minto Mine, whose development was already underway. A delay of just a year would scuttle the mine’s power purchase agreement with Yukon Energy, without which the entire project could not proceed.

“It was a timeline that we quite frankly thought impossible,” recalls Hector Campbell, Yukon Energy’s Director of Resource Planning & Regulatory Affairs. “The project was also the first one through YESAB’s large scale environmental assessment process and nobody really knew what the standards were in terms of how much information you had to prepare, what level of questioning you were going to get or how long it was going to take.”

With so much that had to be accomplished, Yukon Energy reached out to InterGroup to help get it all done in the limited time available.

“InterGroup’s contribution to the project was not only on the project’s many technical elements, but also in motivating the project’s many owners and partners to achieve objectives few thought possible. I credit InterGroup in a large part in being able to get us through this process in 14 months. For us, the ability to get through a brand new environmental process in record time was immense; a record we have never beaten in the 10 years since.”

Campbell says that the project was helped significantly when the three Northern Tutchone First Nations, on whose land about one-third of the transmission line would be located, agreed to work together as a single entity.

“That was important because we didn’t need separate agreements with three different First Nations,” recalls Campbell. “That saved us time. We also needed easements from these First Nations, but because they were brand new as self-governing entities, they didn’t yet have legal processes in place to allow this type of land tenure. We (Yukon Energy) and InterGroup actually helped them in developing the lease agreements we required.”

Another important role that InterGroup performed on the project says Campbell, was in helping Yukon Energy conduct the many community consultations that were required as part of the project’s route selection and environmental assessment process.

“We had a lot of public meetings and people from InterGroup, like John Osler, were very involved with that. He and I spent a fair amount of time on the road, usually in the winter when it seemed it was always -30 or -40,” says Campbell with a laugh. 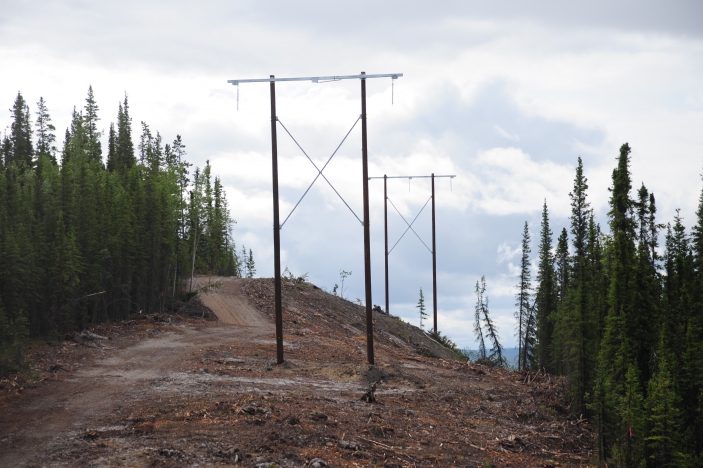 Campbell says that Yukon Energy and InterGroup were pressed to not only achieve agreements that satisfied each community’s concerns regarding the project’s economic and environmental impact, but to also do so in very short order. That meant ensuring that the communities being consulted were fully engaged from the start.

“Like most Yukon communities outside of Whitehorse, they are very small; no more than 100 to 200 people. Everybody knows everybody and one person’s opinion makes a difference.”

“We learned that if you want to have a meaningful meeting or discussion, you have to do it over a potlatch – this is the way the First Nations do things according to their culture. I remember a drive up to Pelly Crossing for one of these meetings, and we stopped in Carmacks on the way to pick up some axes and emergency gear (as door prizes). In addition to being a traditional element of their meetings, the gifts were welcomed. InterGroup brought a lot of creative thinking like that to consultation and negotiations so that we could keep moving ahead quickly."

“Appreciating and respecting First Nations culture was helpful in keeping the Project moving forward. For example, we worked hard to get all of our consultations done before everyone left to go fishing in the summer, and then worked equally as hard to get our reports done by the time they all got back.” 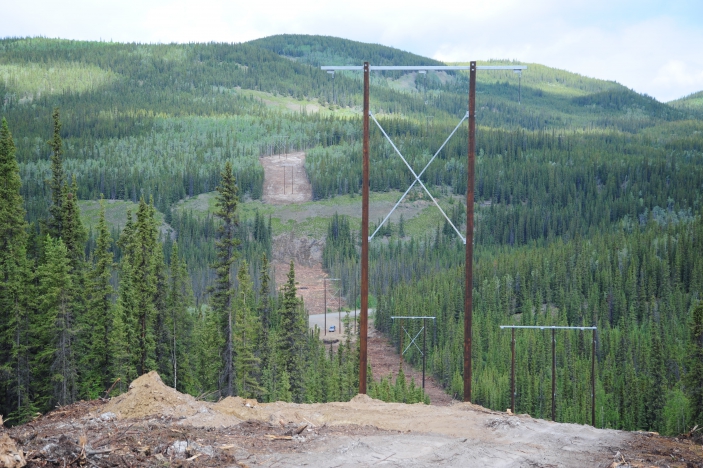 Accommodating the needs of the communities they were working with would prove essential for building trust among all parties, especially given the track record of previous infrastructure projects in the Yukon. On a project where everyone had to work together and no time could be wasted, it was important to keep everyone at the table not just talking, but developing solutions.

“The primary benefit we saw working with InterGroup was that they brought a different perspective to the project,” says Campbell. “InterGroup is made up of scientists and social-economic experts, so the perspective and innovative solutions that they brought were very valuable to the process. That really showed up in overcoming some of the impasses that we encountered in our negotiations because the conventional approach wasn’t working.”

Campbell says that InterGroup’s propensity for out-of-the box thinking was even of value in getting the project started in the first place, as it was InterGroup that would show how a power purchase agreement with Capstone Mining could become the cornerstone for securing other needed financing.

“This project faced some notable challenges. It took some pretty innovative thinking to first make the economics work, then to get three First Nations on side, and finally to get the governments to contribute as well. InterGroup were the architects of the power agreement with the mine, which gave the project a very large economic boost and the reason it had to happen now, or not at all.”

In the end, Campbell says that the CSTP proved to be a win-win proposition for all involved. First, the new transmission line means that both a mine and a community can now draw electrical power from the grid, rather than relying on less environmentally friendly and more costly diesel generated power. Finally, Yukon Energy realized its vision of a unified grid, which will benefit Yukon ratepayers for years to come. Not bad for a project that was completed in record time.

“One of the reasons we continue to go back to the well time after time with InterGroup is their ability to meet deadlines under incredibly stressful and impossible schedules,” says Campbell. “I don’t know how they do it, but I can’t think of a single time when they haven’t delivered an application or a draft agreement that we have needed for a meeting the next day. They have an extremely dedicated team of individuals that are prepared to work unbelievable hours if required by the client. I’ve never seen that with any other consultant that I’ve worked with in 20 years.”